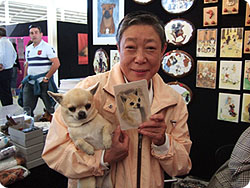 Yoko is interested in painting and making plastic figures when she was a little girl. Since then Yoko has developed many skills and she has been working on many different art form.

Yoko has been focused on paintings dogs and other animals more 40 years. Paintings of personified dogs are neither cartoons nor realistic pictures.
They are established the original style and her heart warming works have a lot of fans from all over the world.

Her works has been exhibited number of time in Japan, and in USA.

In 1986, Yoko has awarded the special prize of American Dog association, and in 1987, presented the work ` Dogs Orchestra` to the Takamadonomiya family( Japanese Emperor`s relatives ). Since then, Yoko did couple of art works for the Japanese royal family as private commission.

In 2000, ` Five Dogs` were used in the movie ` The wives of gangsters` by Takeshi Kitano who is now well famous and established movie director in Japan.

Yoko is continue to work in different form of dogs art.

Your shopping cart is empty.
Categories

Copyright © Puddle by Art All Rights Reserved. Site by WebWorld